Home / World / Maduro does not like interview: journalists held hostage 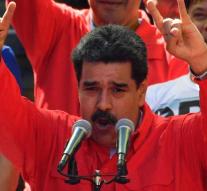 caracas - Venezuelan President Nicolas Maduro on Monday held more than two hours of members of a news team of the Spanish-speaking television station Univison against their will.

According to Univision, the questions asked by journalist Jorge Ramos during an interview with Maduro were wrong. 'An @ Univvision team led by @jorgeramosnews is being held at the Miraflores Palace in Caracas,' said a tweet from the television station.