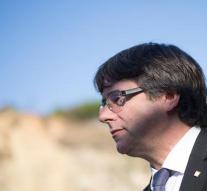 madrid - Madrid does not welcome the letter from Catalan leader Carles Puigdemont. He called on Monday to discuss the situation in Catalonia, while the government had demanded that he unequivocally clarify whether he had declared independence.

The Spanish Minister of Justice stated that Puigdemont's response does not meet the conditions set. Madrid had already told Puigdemont not to be satisfied with evasive or unclear answers.