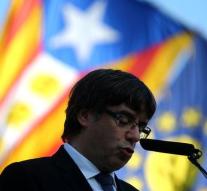 madrid - Catalan leader Carles Puigdemont has to make it clear by Thursday whether he or she has declared independence now or not. If he does not, the central government in Madrid will take over the administration of Catalonia.

'Mr Puigdemont still has the opportunity to start solving this situation,' said Deputy Prime Minister Soraya Saenz de Santamaria. She claims that the Catalan leader makes it clear with a simple 'yes' or 'no' whether he wants to divorce Catalonia.

The government had demanded that the Catalan leader say unambiguously Monday at 10 o'clock if he declared independence. However, Puigdemont called in his letter for further consultation. The government gives him until Thursday 10.00 hours to clarify yet.

Spanish Minister Rafael Catalá (Justice) has already stated that Puigdemont's response does not meet the conditions set. 'The question was clear. The answer is not ', the minister said to reporters. Madrid had already said Puigdemont would not accept evasive or unclear answers.