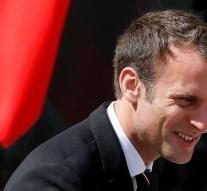 paris - The French president Emmanuel Macron presented his government on Wednesday and it consists of a mix of left and right politicians. With this, Macron's promise is to bridge a bridge between right and left in French politics.

The right Bruno Le Maire is going to wave the scepter about the French Ministry of Economy. Earlier this week Macron chose conservative Edouard Philippe as prime minister.