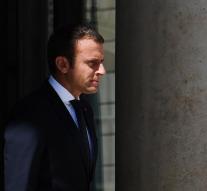 paris - France will shortly discuss with Russia and Ukraine a solution to the conflict in eastern Ukraine. That said French President Emmanuel Macron said Monday after meeting with Ukrainian President Petro Poroshenko. Germany should also participate in the consultation. The Russian annexation of the Crimea will not recognize France, Macron said.

Poroshenko said after meeting that he was 'much more optimistic' about a solution to the armed conflict in his country that has been playing since 2014. Macron emphasized that German Chancellor Angela Merkel, like him, was determined to resolve the Ukraine conflict.

The consultation should be about the withdrawal of troops from the Russian-Ukrainian border area. The talks should take place before the G20 summit, next week in Hamburg.