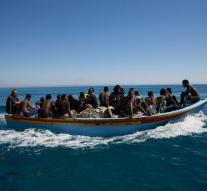 - French president Emmanuel Macron wants to set up hotspots in Libya, where asylum applications are being handled before leaving refugees. Thousands of Libya flee the country where chaos prevails since the uprising in 2011.

That made Macron known on Thursday. Earlier this week, Macron held talks with the Prime Minister of the Internationally recognized Government of Libya, Fayez Al-Sarraj, and the Commander of the Armed Forces, Khalifa Haftar.

They agreed on a conditional ceasefire in the divided country.