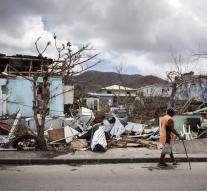 paris - The French president, Emmanuel Macron, travels on Tuesday to the island of Saint Martin, affected by the hurricanes Irma and José. The French Interior Minister Gerard Collomb informed Sunday after consultation with the head of state.

According to preliminary figures, ten people arrived on the French part of the island of Saint Maarten and nearby Saint Barthelemy and seven more are missing. Macron travels to the island with a shipment of goods and reinforcements.