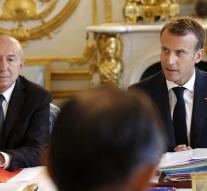 paris - The French President Emmanuel Macron nevertheless takes into account the departure of his Minister of the Interior Gérard Collomb. On Tuesday, in an interview with the newspaper Le Figaro, he repeated his wish to say goodbye as soon as possible in order to become the mayor of Lyon again. The election is in 2020.

Macron refused a day earlier to honor the dismissal request of his important ally Collomb, but premier Édouard Philippe has now asked to mention the names of a suitable successor. Collomb (71), a former figurehead of the socialist party, was mayor of Lyon from 2001 to May 2017. He would like to resign as minister after the European elections in 2019 or as soon as possible.