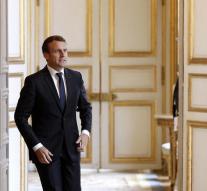 The Maghreb area includes the northwestern African countries. A large part of it was once French territory. The influence of French language and culture is so great today. The Moroccan king Mohammed VI was quick to congratulate Macron when he was elected president of France in early May. He allowed Macron human and intellectual qualities.

The visit of the new president a month later comes at a time when Morocco is facing severe social unrest. There are stubborn demonstrations in the Reef region. But in the capital of Rabat, Sunday was estimated to be 50,000 on Sunday.

The protests focus on the lack of social services and the fight against corruption in the country. During the ongoing demonstrations, the police captured a few hundred people, including the leader of the protest movement, Nasser Zefzafi.

The Elysée has not yet announced an official program of the visit. The French media wrote last days that Macron personally met the Moroccan king. The Republic and the Kingdom have strong ties in the economic sphere. Trade between the two countries is lively. France is the most important trading partner with Spain for Morocco. France is also the largest foreign investor in Morocco.

Rabat declared himself independent of France in 1956.