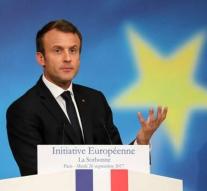 paris - French President Emmanuel Macron pleaded in Paris for Tuesday for a European intervention force with its own budget for actions in international conflicts. In addition, he believes that a European service must be civil protection that is directly applicable to natural disasters.

In his speech on the future of Europe, Macron also advocated a pan-European asylum agency to speed up and align the procedures for refugee reception in the different countries. That plan also applies to common funding for the integration and training of accepted asylum seekers.