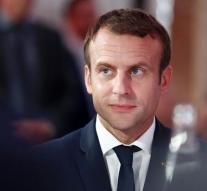 paris - Emmanuel Macron has included a group of relatively unknowns in key posts in his government. The French president presented his new team on Wednesday.

The businesswoman Florence Parly (54) is right at the Ministry of Defense. She is not a stranger in politics. She had been Secretary of State for Social Affairs, Socialist Prime Minister Jospin, seventeen years ago.

In another important department, that of Justice, the lawyer Nicole Belloubet (62) was appointed. She was a member of the Constitutional Council in France until Wednesday, a judicial body that checks or elected elections according to the constitution.

Jacques Mezard, 69, is Minister for Spatial Planning. He was the governor of Agriculture, where he is succeeded by former socialist Stephane Travert (47). On European Affairs comes Nathalie Loiseau (53).

The big winner of both the presidential and parliamentary elections was given this week with four ministers who resigned. Minister of Justice François Bayrou, Minister of European Affairs Marielle de Sarnez, Sylvie Goulard (Defense) and Richard Ferrand (Spatial Planning) do not return to government.