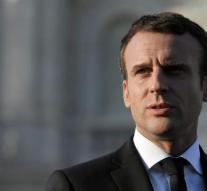 paris - The first hundred days of Emmanuel Macron as president have so far provoked little enthusiasm with the French.

In an opinion poll of the newspaper Le Figaro, only 36 percent of the respondents gave a positive opinion about the president's policy.

The main cause of Macron's low popularity is the reforms announced by the government. In particular, a reduction of a living allowance for the lowest income people has fallen badly. A planned relaxation of the right of resignation is only appreciated by a few.

In recent weeks, the French have heard from the government that they have to 'bite through the sour apple in the coming years before the rewards of the policy are distributed'.

The French government's intention to reduce the budget deficit to the European standard of 3 percent seems to be a good measure for most of France.

Macron's predecessor François Hollande made it better in 2012 after a hundred days. He received a positive review from almost half of the French.