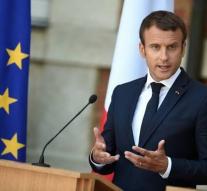 varna - French President Emmanuel Macron has strongly criticized the Polish government. Macron believes that Poland is isolating within the European Union and that Polish citizens deserve 'better earn' than a government that does not value democratic values.

Poland, which has a Eurosceptic government since 2015, responded fiercely and called Macron inexperienced and arrogant. The French president is on a journey through Eastern Europe to get ties with those countries. He made his statements during a press conference in the Bulgarian Varna. According to Macron, Poland goes against European values. 'But Poland is not the country that indicates the direction in Europe. '

'I advise the president to deal with the issues in his own country. Perhaps he will then be able to achieve the same economic results and the same level of security of citizens guaranteed in Poland, 'said Polish Prime Minister Beata Szydlo.