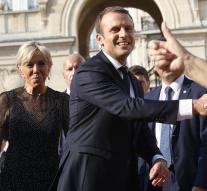 parijs/munchen - French President Emmanuel Macron called on Germany to make a new start for Europe with France. Macron did this in a questionnaire with, among other things, the Süddeutsche Zeitung, shortly before the European summit on Thursday and Friday.

He stressed that Europe is not just making money without recognizing the values ​​of Europe. 'Europe is not a supermarket, but a community where one's fate is shared. ''

'I hope we return (Germany and France) to the spirit of cooperation we knew in the time of François Mitterand and Helmut Kohl. '' Germany and France have to smith a new alliance of trust, 'said Macron.