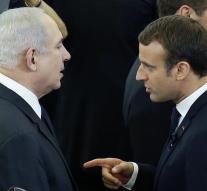 paris - Israeli Prime Minister Netanyahu and French President Macron recalled a mass arrest of Jews in France during the Second World War on Sunday in Paris on Sunday. The two leaders laid a wreath at the commemoration of the raidia of Vélodrome d'Hiver, Sunday 75 years ago.

During these raids, French police officers arrested 13,000 Jews on behalf of the German occupier and locked in a cycling stadium without food. Later they were deported. Almost all of these Jews got into concentration camps. For years, the French role was a big taboo in France. Only in 1995, then President Chirac apologized for this.

After the commemoration, Netanyahu and Macron have yet another consultation on the war in Syria.