Home / World / Macron and Merkel: EU needs to respond too 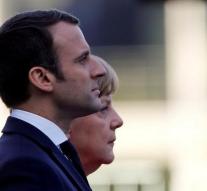 amsterdam - Not only Donald Trump has condemned North Korea's nuclear bomb trial, but Angela Merkel and Emmanuel Macron do that in a joint statement. The EU must take steps, say the two.

'In addition to the United Nations, the European Union must respond now. The (German, Red.) Chancellor and the (French, Red.) President support stricter sanctions against North Korea. '

The United Kingdom also condemned the action. 'There is no doubt that this is a new challenge. It's reckless, 'said Foreign Minister Boris Johnson against Sky News.

Sunday, it was known that North Korea now has a completely destructive hydrogen bomb, which says it is possible to mount on an intercontinental rocket. Previously, the regime claimed that, but then all experts called the existence of the bomb unlikely.

An average hydrogen bomb is about five hundred times as strong as the atomic bombs on Hiroshima and Nagasaki. 'Such a bomb has an all-devastating force, really unprecedented,' says Sico van der Meer of the Institute Clingendael. Read more about the hydrogen bomb here.