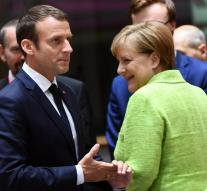 brussels - The experience of French-German cooperation in Europe becomes concrete. New French President Emmanuel Macron and German Chancellor Angela Merkel will hold a press conference on Brussels after the EU summit in Brussels on Friday. That is unusual, usually national leaders do that alone.

Macron said Thursday that France and Germany would speak with one voice and work hand-in-hand. The upturn of French-German ash is expected by EU fans. Some Member States fear that Causing them to get less into the milk.

'We are determined to protect the European project,' Macron wrote. Merkel expressed himself positively about the 'energy and creativity' that the Frenchman loosens. The future of the 'EU of 27', without the British, deserves all her attention now.