Home / World / Macri was sworn in as president Argentina 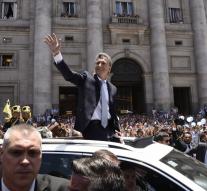 - Mauricio Macri is Thursday in the capital Buenos Aires was sworn in as president of Argentina. The 56-year-old center-right politician succeeds Cristina Kirchner, who had to step down after two terms. Macri is the first non- Peronist president in sixteen years.

The hardest job that Macri expects the next four years, is to reform the faltering Argentine economy. In his first speech in the National Assembly, the brand new President stressed that he wants to redeem all Argentines in poverty. As a solution to this he mainly sees job creation, he told his audience of parliamentarians.

The President has in any case the right background, because he is the son of Franco Macri, one of the leading businessmen in the country. Macri junior has a versatile career. He studied civil engineering. The first job which earned him great fame, was the chairmanship of the famous soccer club Boca Juniors. In 2007 he was elected mayor of Buenos Aires. He was the first citizen of the capital very popular and was reelected in 2011. The presidential elections in November, he won with 51.5 percent of the vote.