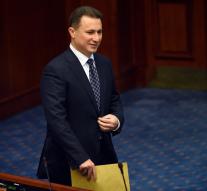 skopje - Macedonia is willing to consider a change of name of the country thus already a 24-year to end diplomatic row with Greece. This said, the Macedonian Prime Minister Nikola Gruevski on Wednesday the British newspaper The Guardian.

In 1991 the country declared independence from Yugoslavia and called itself the Republic of Macedonia. To the anger of many Greeks who feel that their northern neighbors have stolen the name of the eponymous Greek province. Which lies directly south of the Macedonian- Greek border.

Now, says Macedonian Prime Minister that he is prepared to dialogue on the issue to reopen with Greece, provided that any name change is subject to a plebiscite. " We are ready to discuss it, to open dialogue and find a solution ", said Gruevski in the interview.