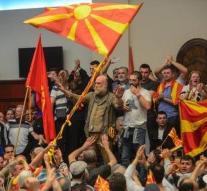 shopping - In the run-up to Thursday of the parliament of Macedonia about 100 people were injured. This was announced by the Ministry of the Interior in the country on Friday.

Among the wounded are three parliamentarians and 22 police officers.

With the regime, nationalist supporters of ex-prime minister Nikola Gruevski wanted to nominate an ethnic Albanian as chamber president. The attackers, partly disguised, intercepted with chairs around them.

Among the wounded politicians is the leader of Social Democrats, Zoran Zaev. On images of the riots there was evidence of blood flowing from a wound to his head. Zaev just announced that the government coalition led by his party had Talat Xhaferi elected as parliamentary chairman.