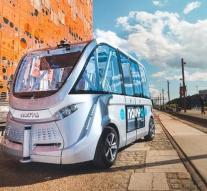 - Lyon has a world first. Starting this weekend driving namely self-propelled buses in the French city around. The vans drive a 1.3 kilometer route between the Hotel Region and the southern tip of the peninsula.

In each bus pass fifteen passengers and driving at a speed of up to twenty kilometers per hour. The vehicles are equipped with technological gadgets like object recognition, lidar sensors and GPS to make the route independently.

The service is called Navya and city buses will in any case long travel around a year. Thereafter, take stock and decide whether the service is expanded.