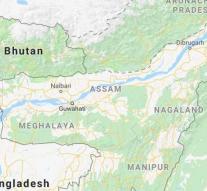 delhi - The Indian police have arrested 16 people after a double murder in the state of Assam. An angry mob killed two men after they stopped at a village to ask for directions, the BBC reported. The attackers apparently thought they were dealing with kidnappers who had been targeting children.

A video of the lynch party appeared on social media last weekend. It shows how one of the victims begs in vain for his life. Inhabitants reportedly thought they were dealing with kidnappers, because they had been warned via WhatsApp.

Rumors about kidnappings of children spread through the messaging service through India. The fear that causes that has cost the lives of several people in a month. The authorities are trying to debunk such stories. For example, the police in the city of Hyderabad invoked last month speakers with 'rumors unbelievable'.

A BBC correspondent watched a 'kidnapping film' that circulates on WhatsApp. It shows how two men on a motorbike grab a child and drive away. It turned out to be a warning film from Pakistan that has been edited to give the impression that it is a real kidnapping.