Home / World / Luxembourg stops car with hashish from the Netherlands 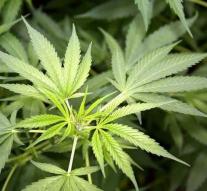 luxembourg - The Luxembourg customs car has intercepted a car with 159 kilos of hash. The director, whose nationality has not been announced, has been arrested. He was on his way from the Netherlands to France.

The slices of hash were both in the trunk and in specially built-in spaces in the car. The narcotics would have a street value of approximately 1.3 million euros.

The customs assume that the smuggling can be linked to organized crime.