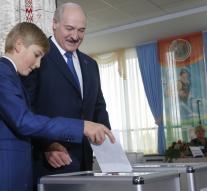 - The Belarusian leader Alexander Lukashenko has won the Sunday presidential election. Preliminary results show that the 61 -year-old Lukashenko has won 83.49 percent of the vote. This was reported by state news agency Belta in the night from Sunday to Monday.

Of voters took 86.75 percent cast their votes. The victory means that the Belarusian leader to his fifth term as president begins. Lukashenko has been in power since 1994 and is also called "the last dictator in Europe".