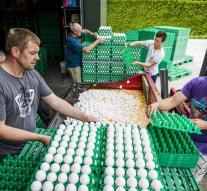 the hague - Land and Horticultural Organization LTO wishes to bring a lawsuit against the NVWA.

The poultry farmers of LTO are unable to speak about the behavior of the Dutch Food and Welfare Authority in the crisis surrounding eggs fipronil contaminated. Earlier, the House also criticized the role of the NVWA.

The NVWA has to watch over food safety but did not do that well, says LTO board member Hugo Bens, a poultry owner. 'In November, NVWA was able to warn us, because the use of fipronil was known to them. Then we could have anticipated it as a sector. They did not do that. '

In the aftermath of the egg crisis, the NVWA had received tips about the use of fipronil in chicken stalls last year, but it did not lead to intervention. The poisonous pesticide was found in eggs.

Millions of eggs in the Netherlands and Belgium had to be destroyed and dozens of laying companies were shut down. The shelves in supermarkets remained empty. The two owners of the company Chickfriend, who used the drug, were arrested.

'Apparently, it's possible that you can shut up 180 companies completely, but you can not handle one company that acts fraudulently,' says Bens. The farmers estimate the direct damage of 50 million euros.