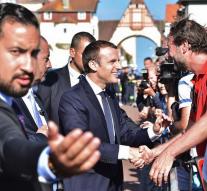 paris - French voters have not been massively drawn to the ballot box on Sunday morning. Around 18.00, according to the Ministry of the Interior, almost 18 percent of the voters had cast their vote; The lowest rise in years.

At the second round of parliamentary elections in 2012, no less than 21 percent of the voters had voted at 12.00. In 2007, almost 23 percent of the voters were involved. President Emmanuel Macron has already voted. He reported to a polling station in the coastal town of Le Touquet in the morning.

The 39-year-old Macron returned to Paris after voting. He lives in the vicinity of the French capital for a memorial ceremony. This is reflected in the famous call by General Charles de Gaulle, who asked French to oppose German occupiers during World War II from London.