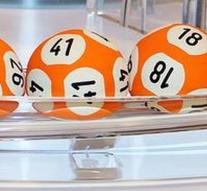 - The Belgian winners of one million prize in the lottery gives away the entire amount to charity.

According to Het Laatste Nieuws involves a couple people over 55 who wishes to remain anonymous. Once they have their fate had handed in a magazine store, letting them know the lottery that they want to donate the amount of 1 665 263 euro to a yet to be determined charity.