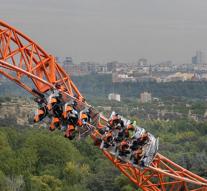 madrid - In a collision between two eight-legged trains in a theme park in Madrid, Sunday 26 fell light-wounded. That is what the Spanish newspaper El País reports. Most victims had bruises and were dizzy after the blow. Nobody got seriously injured, said a spokesman for Parque de Atracciones. The visitors were sent for control to hospitals in the area.

Police and parks are investigating the cause of the accident.

The attraction is called TNT Tren de Mina, which drives the carts at a maximum speed of 55 kilometers per hour by an abandoned mine.