Home / World / 'Lot of ice disappears in the Arctic' 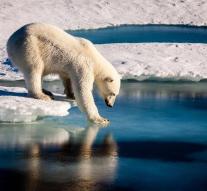 - "The summer of 2016 was a bad year for ice in the Arctic. In 2012 disappeared after previously much ice in the Arctic region. The state last summer along with that of 2007 in second place."