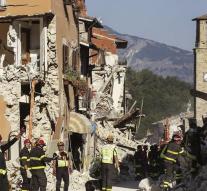 - Italian police on Saturday arrested two men they suspected of looting houses in the village destroyed by the earthquake Amatrice. The pair was immediately taken to a police station in Rome for fear that bystanders would do to them what the Italian newspaper La Repubblica writes.

The two suspects, both in their thirties, claiming that they wanted to lend a helping hand in the disaster area. They had traveled hundreds of kilometers. The police is still looking for any hidden loot.

The earthquake Wednesday morning made the Middle Amatrice Italian village almost razed to the ground. There were 230 deaths. Italy commemorates the victims Saturday with a day of national mourning.