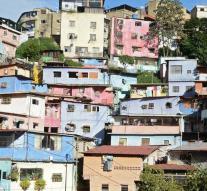 el pinal - In Venezuela Friday broken in several places protests and people beaten to looting after the government had declared at breakneck speed all banknotes of 100 bolivar invalid. The predictions of several economists who had warned of chaos, thus came.

President Nicolas Maduro made last week suddenly announced that the notes would be taken out of circulation within three days because they are massively falsified, according to him by the Colombian mafia. The population had to hand the notes at banks.

Now they have their value as announced lost. Citizens who still 100-bolivar notes to surrender, only a few days to go to two branches of the central bank. There are huge rows.

The replacement bills that would actually be launched Thursday, are nowhere to be seen. Meanwhile, ATMs are empty and many people without cash.

A few benefits from the situation. So bought an orange and avocado seller for the central bank in Caracas for 80 bolivar bills of 100 people who had no appetite for the huge line.