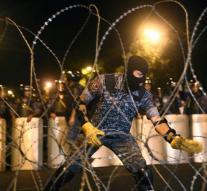 - After two weeks, the twenty armed hostage takers, who surrendered Sunday several people hostage in a police station in the Armenian capital Yerevan. Two officers were slain during the hostage and there were several wounded.

The 31 hostage-takers demanded the activist opposition leader Jirair Sefilyan is released. He's stuck on suspicion of illegal possession of arms. They also demanded that President Serzh Sargsyan would resign.

In recent days, the police attacked the building, triggering fierce gun battles and explosions. After at least seven hostage takers were injured, the manager decided to surrender Sunday.


A police officer at the storming of the slain police station on 17 July. Among the hostages were among other officers, senior police officers and ambulance staff.

Thousands of Armenians sympathized with the hostage and took to the streets to show their discontent.