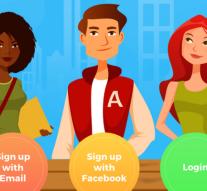 - "Only with your sandwich and a carton of milk to spend the lunch hour- really cozy it is not. And someone steps by asking if you can sit down, you have to just have the guts for it. For students who experience daily, has a 16-year-old student from California devised an app."

"As a seventh grader Natalie Hampton was the year only during lunch. That not only felt quite lonely, it also made her an easy target for bullies. Although she now goes to another school and has many friends, she often thinks back to that lonely time. It inspired her to make an app called Sit With Us."

"Hamptons app arrived on September 9 in America and pupils at her school are already using it. Or, in the Netherlands there is a need for such an application, it will be seen later."