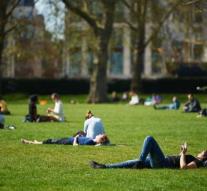 london - The mayor of London issued an emergency warning for air quality in the British capital. Due to the extreme heat, poisonous air can blow over the city, said Sadiq Khan.

London sighs Wednesday with temperatures up to 34 degrees, making it the warmest day for over 40 years. According to scientists, the dangerous air quality reached her peak on Wednesday afternoon.

Londoners can get busy roads better, The Evening Standard quotes a statement from the city. Vulnerable groups, such as people with pulmonary disease, heart problems and the elderly, do not get the advice.

Khan is currently investigating whether heavily polluting vehicles in London can be taxed. The city is known for its highly polluted air.