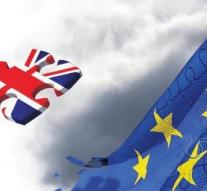 london - Great Britain is willing to pay an amount of £ 36 billion (40 billion euros) before leaving the European Union. That has reported three British government sources to the Sunday Telegraph newspaper. The newspaper reported that the government of Prime Minister Theresa May would like to set this sum only if there is an agreement on a trade agreement with the European Union.

Brussels wants London to fulfill these obligations. In recent months, amounts have been mentioned ranging from 50 to 100 billion euros.