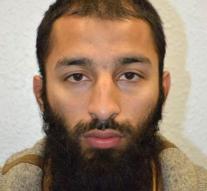 london - Khuram Shezad Butt, identified by the police as one of the responsible for the London attack, figured in the movie 'The Jihadis Next Door'. That has revealed British media Monday evening. Chanel 4 sent the documentary, after a year of research and use of undercover recordings, in January.

Butt is seen at meetings with two notorious islamist preachers, including hate-imam Mohammed Shamsuddin, who warned Britain for the arrival of Shariah. He also appears in association with Abu Haleema, who is suspected of turning a schoolboy into a terrorist act.

Butt would be radicalized by videos on YouTube. He, according to a knowledge, went to Syria to join the armed struggle, but his family and then pregnant woman brought him to other thoughts.