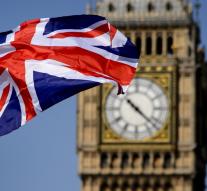 london - Police in London shot dead a man and with a foiled attempt to free two prisoners. That happened when the two detainees to the court in the north of the British capital were transported in a van.

At the rear entrance of the court, according to the BBC shot a 28-year-old man who wanted to free the two. Four others who were part of the conspiracy were arrested by the police.

The two prisoners were shortly afterwards sentenced to fourteen years in prison for a series of crimes, including possession of machine guns and other weapons.