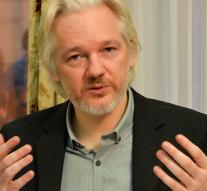 london - Police in London has lifted the continuous monitoring of the Embassy of Ecuador Monday. The embassy was guarded since June 2012 because WikiLeaks founder Julian Assange had sought asylum there . According to police , the 24 - hour monitoring "is no longer proportional".

Yet Assange not have to think that he has recovered his freedom of movement. The police states that visible surveillance is replaced by less visible surveillance. "The services remain committed to the execution of the arrest warrant and want to see Julian Assange in court". Assange is suspected of rape in Sweden. He was required to report in June 2012 for extradition to Sweden , but fled to the embassy. He fears that Sweden will extradite him to the United States , who want to prosecute him for leaking state secrets.