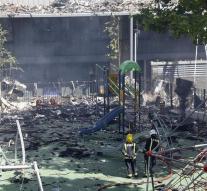 london - In London it is feared that the death toll of the massive fire Wednesday will rise further in a tower flat with 120 apartments. The fate of many of the approximately six hundred people living in the apartment building is not yet known.

Thursday afternoon, according to British media, many people were missing, but the authorities did not mention a number. There is no hope that people still live in the Grenfell Tower building in the North Kensington area.

The number of people who came to life by fire rose to seventeen on Thursday. Earlier, the London police reported 12 deaths.

There are still 37 injuries in hospitals, including seventeen people who are seriously affected. Prime Minister Theresa May visited the site of the burned-out building. She has officially investigated the fire. Labor leader Jeremy Corbyn also visited London and spoke to residents of the flat.