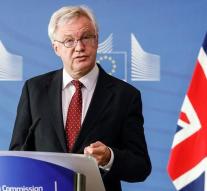 brussels - The British government wants to link the final settlement of the European Union's divorce to a deal on the future (trade) relationship. That said British Prime Minister David Davis for the start of the fourth round talks about the forthcoming divorce in Brussels.

The other 27 EU countries need not be afraid that the British will not meet financial obligations from EU membership, according to Davis. But, 'it is clear that this subject can only be concluded under and in line with a new and deep partnership with the EU.'

According to EU chief negotiator Michel Barnier, the three main issues, including the money, have to be handled adequately before anything else is begun. The transitional period of about two years proposed by Prime Minister Theresa May is also separate, he said.

Barnier said it was curious how the British would translate May's speech to negotiating positions last Friday. According to Davis, the parties must be pragmatic.