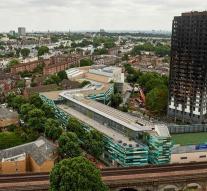 london - The British police are investigating the death of blame in London's Grenfell Tower Tower, which killed 79 people earlier this month. The police announced this Friday. According to the police, the fire was born in a freezer on 14 June and spread rapidly throughout the entire building.

According to the police, the material with which the walls of the flat were isolated did not pass any safety tests. Earlier it was suggested that the fire spread so quickly through flammable materials in the facade cladding.