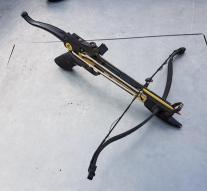 london - The London cricket stadium The Oval was cleared on Thursday afternoon after someone had shot an arrow on the field with a crossbow during a match. The police said in a statement that it is a controlled evacuation of the sports complex. 'No wounds have been reported. At the moment we think the arrow came from outside the stadium. '

The British media showed a picture of a umpire who picked up the arrow and stopped the match between the Surrey and Middlesex cricket teams.