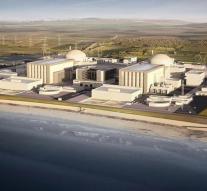 - "The British government, the French energy company EDF Thursday granted permission to build a new nuclear power station in England with Chinese financing. The government there are new conditions attached to it, which can prevent a possible sale of the majority stake of EDF both before and after delivery."

"The nuclear power plant should be built at Hinkley Point, on the Bristol Channel. It will be the first new nuclear power station in Britain for twenty years. The construction involved more than 21 billion euros, of which two thirds borne by EDF and a third for China. The same structure, according to the plans are implemented at two other nuclear power plants, in Sizewell and Bradwell."