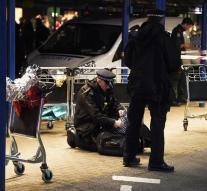 London London City Airport has been closed Friday night a few hours after a chemical incident. Dozens of people were unwell, and the airport was evacuated.

Emergency services treated 27 people, two people were taken to hospital for checks. About 500 people had to leave the airport. Reported Sky. Travelers walked through the long evacuation delays.

Firefighters and police who investigated the case, wearing protective gear. 'When searching the airport found its gasverstuivers', says the police.

About the cause of the incident is still unknown. 'This is not treated as a terrorist-related incident. The spray may be coming from an aerosol of a passenger.'

'Everyone was really coughing and had difficulty breathing,' a witness tells Tanya Ramsay told Sky News. 'People could not get their hands to their mouths. I overheard a couple of guys on stinging and watery eyes. '\n  \n  \n   advertisement

Boxer David Haye, who was on his way to Edinburgh wrote on Twitter that he could not travel further '#CityAirport was evacuated when everyone uncontrollably and began to cough. '

Passengers were led outside the terminal building. Incoming flights were diverted from Frankfurt, Amsterdam, Belfast and Paris to other airports.