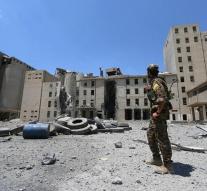 - A rebel group in northern Syria getting air support from the Americans, suggests 48-hour cease-fire, so that the civilian population in Manbij can leave the city. This was reported by the Syrian Democratic Forces (SDF), an alliance of Kurdish and Arab rebels. After the break the coalition resumes bombing in support of the offensive against IS.

Thursday, urging an end to the Syrian opposition to the airstrikes. According to the Syrian Observatory for Human Rights, there are 77 people in recent days by air strikes killed.

The bombings were conducted Monday and Tuesday by the American and French Air Force. Monday arrived while 21 civilians. Tuesday, 56 people were victims. Among them eleven children. French President Francois Hollande said on Thursday still have no information on civilian casualties by French air strikes.


Manbij offensive began in May.