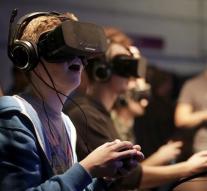 menlo park - Facebook is going to do more with virtual reality. Users of the special VR app Spaces can stream live with it. Their role is played by an avatar. Friends who see the stream can respond to it. Those comments and likes are added to the images and the avatar can 'play' like the thumbs and texts are objects.

Facebook launched Spaces a few months ago. The app is intended for the Oculus Rift and is still in beta version. Spaces must bridge the gap between virtual reality and the common network of friends.