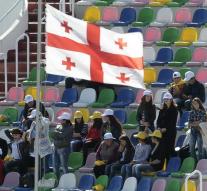 - Only a few thousand Catholics on Saturday attended the papal Mass in the Georgian capital Tsiblisi. It was thus one of the worst areas of papal miss outside Italy. Pope Francis will visit Georgia this weekend hoping to improve relations with the Orthodox Church.

The stadium in Tbilisi with a capacity of 25 000 persons remained virtually empty. The turnout was so low, because in Georgia than 1 percent of the population is Catholic yet.

The Vatican had actually expected a delegation from the Patriarch of the Georgian Orthodox Church, Ilia II. But which did not show. The pope had Friday upon arrival at Tsiblisi have a personal meeting with Ilia II.

Sunday the pope flies back to Rome.