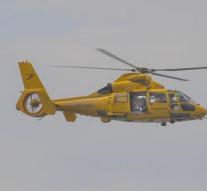 enhuizen - A 9-year-old boy was seriously injured on a sailing ship on the Markermeer on Monday. He has lost his hand by a horrible accident.

That is what the Royal Dutch Rescue Company (KNRM) reported, called around at noon to go to the ship with speed. Crew had already given first aid to the joch when the rescue workers arrived. He was taken to the hospital with a trauma helicopter.