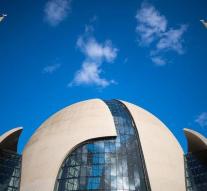 cologne - For the peace march of Muslims under the motto 'Not with us' in Cologne, only a few hundred people gathered on Saturday. The organizers had counted on 10,000 participants. Hot debates were preceded by the manifestation, especially because a dome of Islamic organizations, Ditib, has denied participation in the anti-terrorist demonstration.

The organizers called out Muslims from all over Germany to rule out Islam and terror after the attacks in Berlin, Manchester and London. 'We do not allow terrorists to kill innocents in the name of Islam,' the organizers wrote in the call.

Ditib did not attend the invitation to join. Muslims would be stigmatized by the demonstration and identified with international terrorism.

German officials denied the denial of Ditib. The Central Council of Muslims in Germany and the Turkish community, however, support the demonstration, as well as Christian groups and German political parties.

According to the police in Cologne everything was quiet.