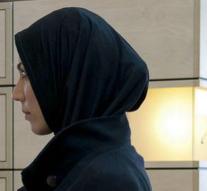 berlin - German politician Alice Weidel, one of the two list tractors of the right-populist party Alternative für Deutschland (AfD), wants to prohibit wearing a headscarf in some places. That's what she said in an interview with Berlin's 'Tagesspiegel' (syndication). Completely veiled by daily life, is absolutely inconsistent.

Weidel believes that a headscarf embodies the apartheid of men and women and is therefore a completely sexist symbol. 'Main dishes must disappear from the street scene and public spaces. That should be legally laid down. 'Bearing a nikab or boerka must even be banned everywhere. Violation of the rule should be a fine fine.

With her comments, Weidel goes further than the AFD electoral program. It merely advocates a ban on full disclosure in public and public service. In addition, government workers do not get a headscarf.